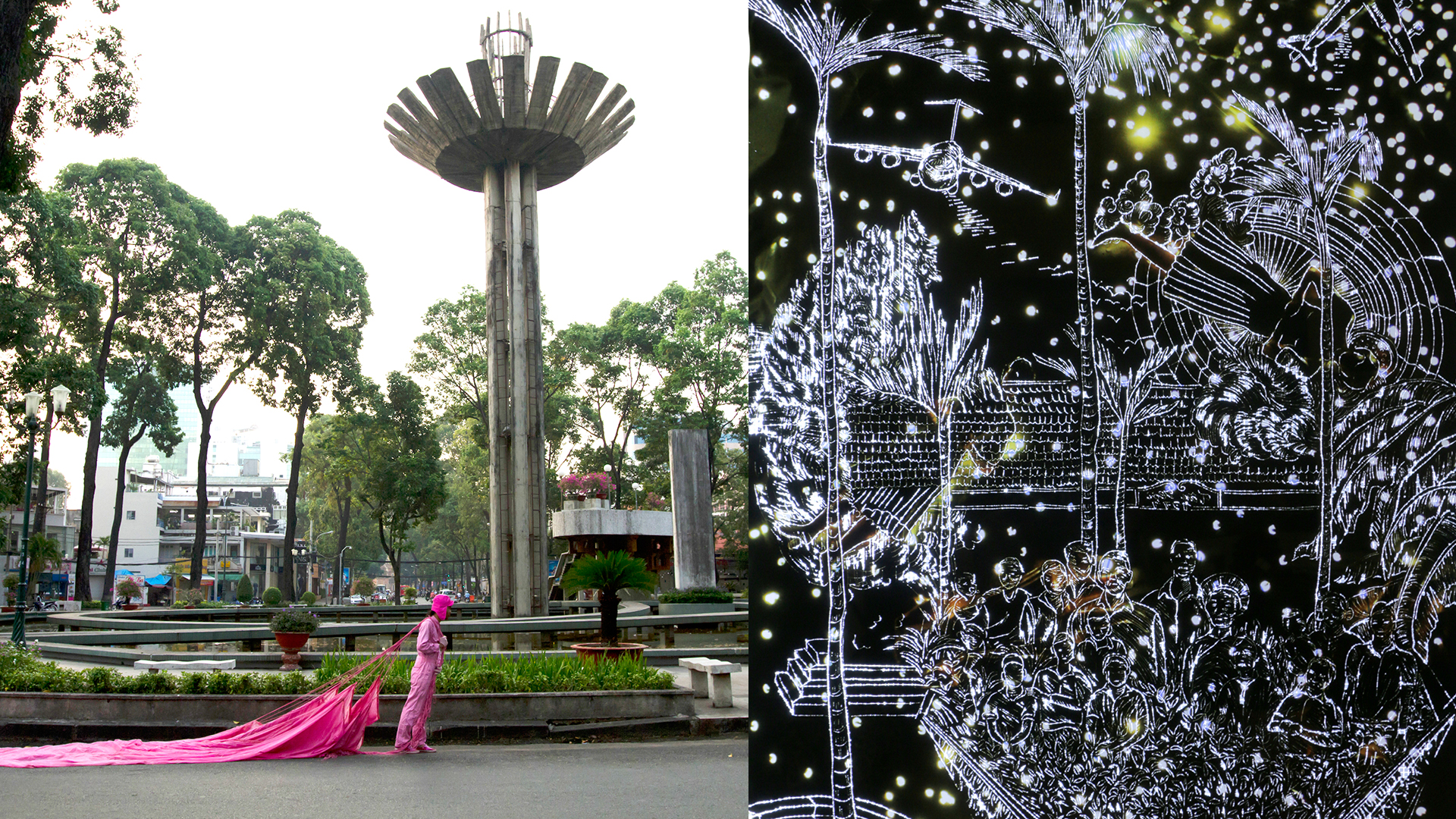 In our winter edition of Galeria, we present artworks from Trần Minh Đức and Ngọc Nâu‘s previous practice, providing a window onto some of the inspirations, concepts and materials, which have laid the foundation for their works in the group show ‘Singing to the Choir?‘ (on view  at The Factory on the ground floor).

In ‘Family memories’ by Ngọc Nâu and ‘A Land at a Not Yet Known City Pond’ by Trần Minh Đức, light becomes the main source of power that gives ‘life’ to the works. As a device (light-box), its billions of electromagnetic waves travel across the surfaces of Đức’ photography and Ngoc’s engraved perspex, emitting light from behind, calling for equal attention to what appears in the foreground and the background, the center and the periphery of the images. Light here can symbolize the spiritual, the divine and the immortal, possessing the power to give life and fight back the destructive forces of darkness. Light, as illumination, can be a sign of purity, reason, wisdom and truth. In the writings of the philosopher Plato, and his allegory of the Cave, for example, not only does light allow humans to see the shadows on the wall, but it also leads them out of darkness and into the light of the sun, where they would be able to see the world around them.

In Ngọc’s and Đức’s light-box works, what do you think you can see?

“These works were created based on my impressions of the stories my mother used to tell me, not only about our own family, but also about others’. The act of etching and engraving onto industrial perspex, for me, is similar to sketching, through which I can quickly visualize and keep my (as well as others’) memories of the people and events that happen in the places where I live. I believe the fate of each person is tied to the place where they were born.

My mother recounted many stories about a period of time in the 1960s, during the Vietnam War, when my family had to flee to Thai Nguyen. There were days, as she was herding the buffalo, when rows of bombs would be dropped, scattering on distant fields. She could never forget the image of her neighbor’s body parts flying off and getting tangled on treetops as they got struck by a bomb explosion. There were moments of peace too, such as my grandparents’ old house with its bright red tiled roof, surrounded by lush hills of tea trees owned by the family, and three areca palms at the front yard. Theirs was one of the most affluent families in the village at the time – a pay-off for their cumulative efforts in building a new life after fleeing away from the war in Hanoi.”

“The pink parachute [appearing in these photographs] symbolizes the dream of discovering new lands and exploring new horizons. As one of mankind’s most ambitious projects of exploration and enlightenment, this dream also brought with it imperialism, colonialism and war, with lasting impact and consequences still very much felt today in countries such as Vietnam.

The parachute was first collected at the military market in Saigon, and later dyed pink. In this process of collecting and dyeing, it is as if the memory of wartime has parachuted through the memory of me – a post-war child – and landed into a fantasy, or a daydream, where a pink layer of oblivion is obscuring the pain and horror of yesteryears. How do we – as the youth of today – learn about the events and people that had come and gone before us? Will we ever know the full depth and breadth of past history/ies? Nonetheless, this act of landing could also be seen as a part of one’s search for themselves and their origin – a journey unfixed, constantly moving, and always in the process of perceiving, analyzing, adapting and growing.”