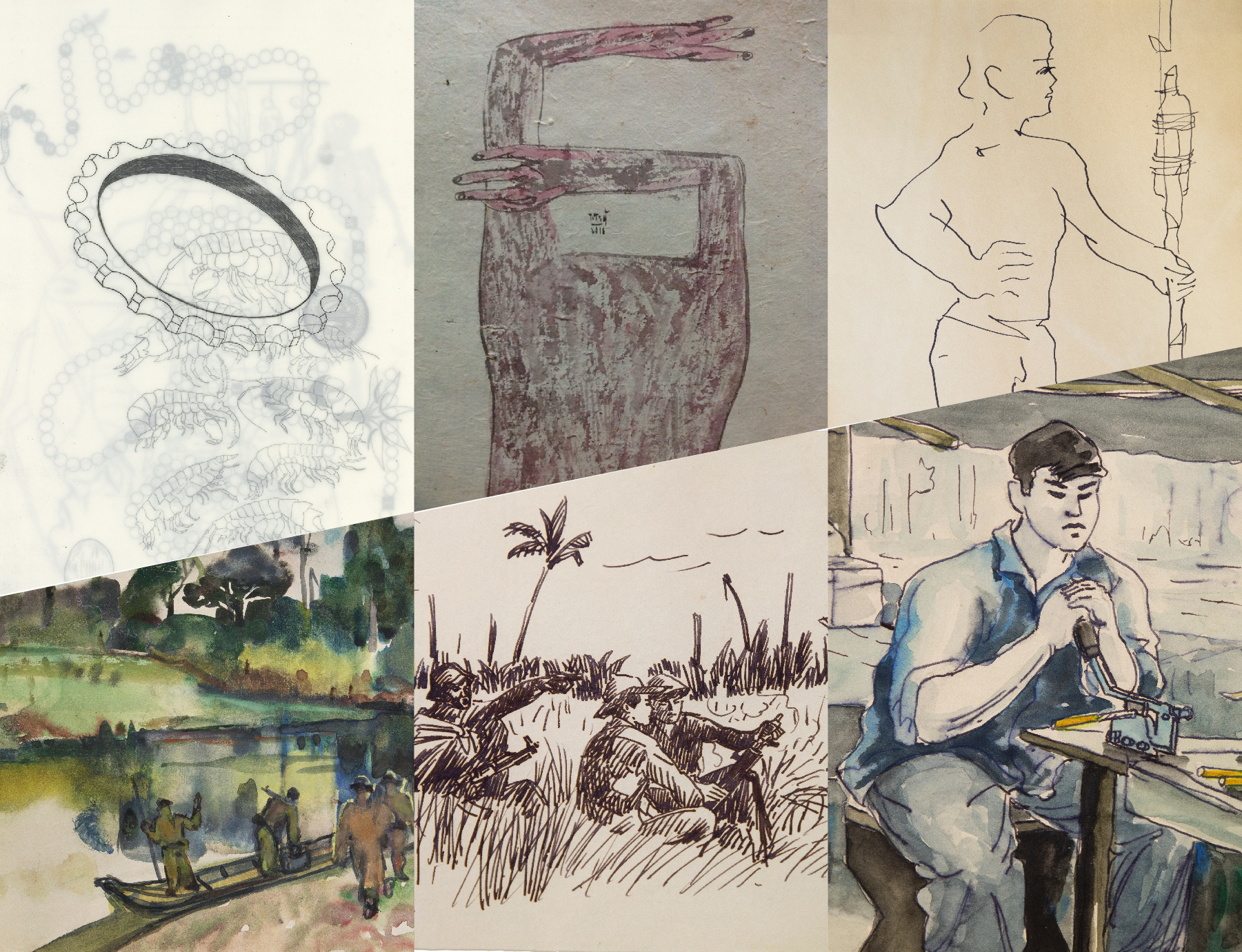 DRAWING TIME THROUGH THE FIGURE: FIGURE DRAWING OF TWO ERAS

In Sino-Vietnamese language, there is more than one word to describe one’s look or appearance, some of which include tướng mạo and diện mạo. These two words carry a nuanced difference in connotation—while diện mạo refers merely to the physical appearance of a person that normal eyes can perceive, tướng mạo refers more to ‘physiognomy’ (the feelings or aura of a personality suggested by looking at a person’s facial features, body structure and manners). Đổi and rời both mean ‘to change’ or ‘to shift’ from one state to another. Thế (or thế thời) can be understood as the era, a period of historical time passage determined by certain events. The title of this edition, ‘Tướng đổi thế rời’, thus largely implies that as we study the changes of the ‘figure’ through the creation of the artists, we are likely to learn about the changes in the socio-political context of the time. Co-organized by The Factory and VIN Gallery, with support from Galerie Quynh, this second edition of Glass Box, Tướng đổi thế rời compares the war era with the contemporary moment, utilizing figure drawings of wartime veterans represented by Trương Hiếu, Thái Hà, Ngô Viễn Chí, Nguyễn Thanh Châu with  contemporary artists Trương Tiến Trà and Trương Công Tùng.

In this display, the wartime veterans of the Vietnam War—as represented by Trương Hiếu, Nguyễn Thanh Châu, Thái Hà, Ngô Viễn Chí—employ sketching not only as the most convenient and available art form at the time, but also as the most powerful tool for them to fulfill the duties set by their commanders and the order of the artists’ moral compass.

Sketching is the art form that undeniably withstands the requirements and harsh conditions of war: its technique is fast (as the artists needed to capture what is happening in front of them immediately, especially on the battlefield); it is economical and convenient (only a pencil and paper are needed); it is intimate (imagine a soldier sitting for an artist to draw their portrait – a prolonged, silent period of time,  exchanging glances only between them). The content of these wartime sketches, whose realistic form stands as a diligent document of the time, is dominated by portraits of soldiers and ordinary people, landscapes of everyday life on a battlefield. As shared by veteran painter Quách Phong in a project  ‘Sketching Vietnamese history’ (2016) curated by San Art: “During the war, creativity was only secondary. The history/reality was too overwhelming and beautiful. So there was no need for artists to create anything. It was more than enough to depict truthfully what was happening. I only drew what I saw as honestly as possible…” To these artists, nationalism and ideological beliefs were in union.

Half a century after the war ended, at the beginning of the 21st century, Vietnamese contemporary artists have a much different interpretation of figure drawing. In most wartime sketches, due to the need of recording the harsh reality, the size and shape of the figures were often proportionally portrayed; or it would be exaggerated for the communication of heroism. In contemporary drawing, as seen in the works of Trương Công Tùng and Trương Tiến Trà in this display, released from  the burden of realism, they freely roam with their imaginative choice of expression and contemplation of the personal and collective experiences of this era.

The works on view are quiet yet compelling perspectives of Vietnam. It is as if the whole display is a wise, respected storyteller, who has lived a century with significant social shifts. Time is condensed, delicately taking us on a return journey to the intimate moments of the Vietnam War.

This second edition of the Glass Box is co-organized by The Factory Contemporary Arts Centre and VIN Gallery, with the support of Galerie Quynh. All the artworks in this program are for sale, unless stated otherwise.

Drawing time through the figure BROCHURE