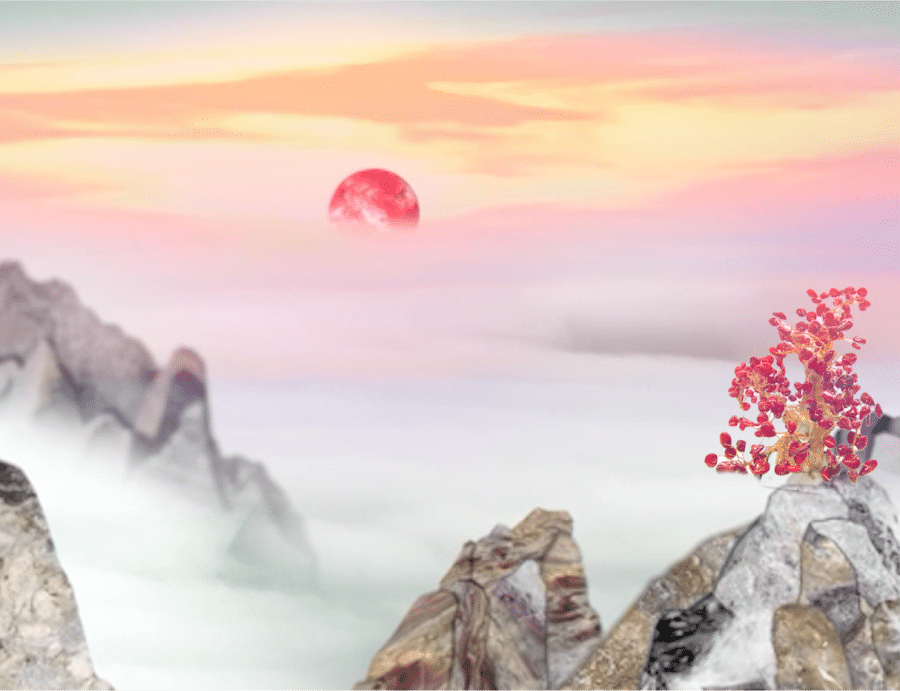 Artists: Lê Giang
Organized by: The Factory Contemporary Arts Centre
Exhibition dates: This exhibition will be held in Hanoi at the end of 2022

In Lê Giang’s exhibition ‘Future Perfect’, the popular Vietnamese belief ‘Vạn vật hữu linh’ (‘All beings are with soul’) [1] is the starting point for her year-long artistic inquiry towards The Factory’s fellowship initiative ‘Re-Aligning The Cosmos’. Exploring the element ‘earth’ for this Fellowship, Lê Giang questions how Nature (particularly precious and semi-precious stones) have been exploited to serve the production and consumption of luxurious Feng Shui [2] products in Vietnam. Lê Giang has delved into the wealth of local mythology and folklore that record tales of stone worshipping; scanning through the abundance of information found in scientific reports and geological surveys; collecting news coverage surrounding issues of stone extraction and the booming trend of trading Feng Shui products online. Drawn to the processes of how something is granted the status of ‘sacredness’ (how spiritual symbols can be transformed and moulded into sellable goods), she explores the mechanisms (both industrial and small-scale, in-person and online) that are employed to control, extract and inject commercial values into Nature. This exhibition ultimately provokes questions surrounding the industries and communities that produce and perpetuate superstition into man-made objects of belief, compelled by the ignorance of humans today who consume such products and experiences.

Spanning a variety of materials, including painting, sculpture, video art and installation, this exhibition, at first glance, glows with gleeful colour, presenting sceneries of a hopeful world from the future. In one room, lyrical sounds of water streams and birds singing can be heard amongst abstract paintings depicting dreamy terrains, and a video montage playing glorious visions of a ‘sơn thuỷ hữu tình’ (romanticized landscape) [3]. In the background, violent machines are at work – our vision is assaulted by the chopping and mincing of the flesh of stone, as machines gash and slit its skin, sanding and flattening its face. In another room doused in red, a vertical hybridized sculpture in the shape of a rock formation (a Feng Shui commodity made of gemstone commonly sold across Vietnam) slowly rotates, surrounded  by an intense white glow, radiating from a group of LED ring lights (a product often used to enhance the look of both people and products sold online). In another room, a split screen video glimmers with shades of red and green across the shadow-tinged walls, showing close-up and wide shots exploring the inside of a real cave (in Yen Bai province) [4], revealing its beauty in both its minute and majestic form. Like many other caves across Vietnam, this pictured cave has been redesigned with low-budget neon and LED lights, and re-purposed as a site for spiritual tourism. As the video unfolds, one starts hearing an interview with the ‘owner’ of the cave, explaining how this ‘designed’ cave in fact demonstrates an effort on the part of locals like her to make ends meet. This act, nevertheless, still remains an act of spiritual manipulation.

Collectively, the artworks in this exhibition warn of a future not so far away, a future already proliferating on grounds of human abuse and destruction of Nature. Under their omnipotent hands, with their God-like wisdom, humans have adorned Nature as no longer a sacred being. Her body, and her symbolic weight, can now easily be uprooted, chopped and morphed into tameable objects – to be traded, possessed and caged indoors. Exposing, while also appropriating such merciless extractive methods we use to treat and consume Nature, Lê Giang has created her own version of a ‘perfect future’. Its surface now sugarcoated with alluring deceit; its insides neglected, disfigured and rotten.

One may ask, how did we get to this point of utmost ill will – continuously twisting and exhausting our natural, spiritual and mental landscapes? In a culture where gemstone paintings, sculptures and luxury totems are believed to attract positive energy and good luck, this exhibition makes us think twice about artificial beauty, the false promise of objects of belief, and the man-made violence we have normalized; such elements so apparent in these illusory representations and practices of a Feng Shui so far removed from its original teachings. Trapped in our own oblivion and excuses – in the need to sustain our livelihood, in our obsession with power and profit – are we aware that these attitudes are propagating without forethought of how Nature is exploited, re-crafted and traded at an alarming rate? Do we realize that, in our desire to seek a spiritual haven, we are not only taking advantage of, but also neglecting, those who are afflicted? Have we ever stopped to ask ourselves, whether there is enough time for us to halt and heal this immediate reality we are in – one littered with repercussions that may never be reversible?

Such questions linger, as one leaves this ‘Future Perfect’.

(This content is adapted from Bill Nguyen’s curatorial reflection ‘Which Future?’ Full article can be downloaded on The Factory’s website)

[1] A Vietnamese saying that thoroughly illustrates Vietnam’s centuries long belief in animism – a mode of living and school of thought shared by many other indigenous peoples around the world. Animism encompasses the beliefs that everything – plants, animals, weather patterns, inanimate objects and Nature at large – has a spirit, that these spirits are instrumental in determining an individual’s fate, and that the natural, physical and supernatural worlds have a deep connection. Mirrors or strips of cloth above doorways to ward off evil spirits; sacrifices to pay respect to water spirits or vegetation deities who bring fertility and good crops; honouring and communicating with the deceased through daily ancestor worship at family altars etc. – these are but a few examples of the differing ways through which animism is manifested locally. Once condemned as ‘superstitious practices’, these beliefs have continued to proliferate since the 1980s in Vietnam

[2] Literally translated as ‘wind-water’, Feng Shui is a pseudoscientific practice originating from ancient China, historically used to determine auspicious sites for dwelling, and govern the orientation and design of architectures (often spiritually significant ones such as tombs or citadels). Traditional Feng Shui practices are known to carefully take into consideration the particularities of local geographic and natural features (such as bodies of water, the direction of the wind, the constellation of the stars etc.), purely concerned with the harmonious flow of energy, and the ways in which humans can best keep the balance of Nature – and themselves – intact. In contemporary times, Feng Shui continues to play a significant role in the everyday life of the Vietnamese, oftentimes to the point of superstition. Not only have Feng Shui readers, shamans, and divination mediums become necessary consultants for domestic, professional and spiritual conduct, one’s fate is now also determined by the lucky phone number they own, the precious jewelry they wear, and the luxurious gemstone decoration they display at home.

[3] Sơn thuỷ hữu tình is a romanticized genre of art, including painting (often in oil, acrylic or gemstone powder), sculpture and textile, that depicts – in vivid and oversaturated colors – landscapes with majestic mountains and expansive rivers (often accompanied by a herd of deer or a flock of stokes), supposedly to create a sense of harmony and peace. Sơn thuỷ hữu tình paintings can be found on display as decoration in many Vietnamese households.

[4] For her research, Lê Giang has travelled from Luc Yen and Van Chan district (Yen Bai province) to Quy Chau (Nghe An province), all of which are located in North Vietnam. Known to be with the largest supply of gemstones, in 1987, gems were first discovered in Luc Yen. Ruby, sapphire, and spinel are the most valuable; tourmaline, gem-quality feldspar, pargasite, and humite are also mined there. As a result of this discovery, Luc Yen has become Vietnam’s most important gemstone-trading centre over the past 30 years. Although gemstone extraction and production was not officially legalized, many independent miners and corporates still carried out illegal and increasingly professionalized exploitive activities, leading to several environmental and cultural impacts (such as the heavy pollution of Thac Ba Lake, one of the main water supplies for local communities; or the deforestation and re-appropriation of the forests, once considered a ‘sacred’ place for local spiritual practices, for other purposes). Meanwhile, Quy Chau (Nghe An province), famous for its unique rubies and sapphire, is also among the most popular mining destinations in Vietnam. This thirst for gemstones has created several unsavoury consequences such as illegal mining, corruption, violent disputes between mafia gangs, poor working conditions for labourers leading to mass accidents and deaths etc. By the 2000s, mining in this area seemed to have declined thanks to governmental policies regarding the banning of such activities, which in fact, have recently become active again behind closed doors. See more https://www.gia.edu/gems-gemology/WN13-Long-Gemstone-Mining-Vietnam