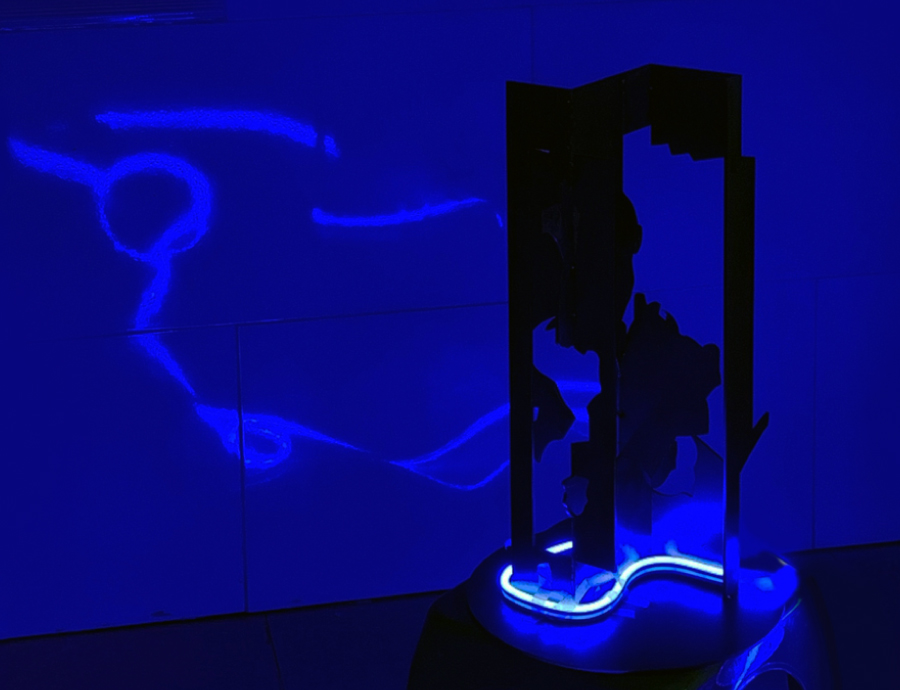 Tuyền Nguyễn is an artist who currently lives and works in Ho Chi Minh City, Vietnam. His paintings are characterised by bold movements, Cubist-inspired figures, vivid colours and sharp outlines. For this exhibition, Tuyền explores the possibility of translating his visual ideas – composition, colour and figures – into three-dimensional form. This body of works marks the artist’s exploration of sculptural form, a medium unfamiliar to his practice, yet continues his fascination with spatial perspectives, fragmented figures, as well as his preoccupation with positive and negative space.

Growing up in the Central Highlands in a farming household, Tuyền later moved to Ho Chi Minh City for his higher education. Tuyền discovered his passion for art while he was studying business and left his degree to enroll in the Ho Chi Minh City University of Fine Art and worked various odd jobs to support his studies. It was during this time that Tuyền began to ponder the loneliness and isolation of a man like himself in this larger, highly urbanised and concretised society. His constant relocation during his upbringing, combined with his seemingly never-ending movements within the city of Saigon as a tenant, have contributed to Tuyền’s frequent thinking about space – both as a physical and mental home for him and his art-making.

In this latest series, the artist revisited some of his most memorable ‘self-portrait’ sketches, which had been created as visual diaries logging his personal and artistic development in response to many different studio spaces. Tuyền starts the process of making this series by creating smaller scale models. Each selected sketch is transferred onto a thin cardboard paper using a tracing method. This is where the figures are carved out to form details of an accordion-folded paper object. After creating all the maquettes, he assigns sizes and works with a metal worker to convert the models into metal sculptures by welding cut-out iron sheets.

Unlike his previous exhibition projects, Tuyền has been  asked to work with a designated space ( two upstairs galleries at the The Factory), which requires him to respond to the space, factoring in the characteristics of the display environment during his art-making process. For Tuyền, painting is the language that he references , leading him to imagine the rooms as two canvases: the sculptures are the subjects of the painting and the space around it is the background. Here, the composition is not fixed but keeps rotating depending on the visitor’s view point. Playing with colour, a strength of his, Tuyền fills one room with 5 smaller objects spilling onto them a shade of dark-blue neon light and the other room with just the shadows projected onto the walls from the light source inside the sculptural piece.  Alternating between positive and negative space in a rhythmic manner, Tuyền invites the audiences to join his inner dialogue.

Tuyền Nguyễn takes part in ‘Materialize’, a program initiated by The Factory, co-sponsored by Prince Claus Emergency Fund. This program aims to provide exhibition opportunities for Vietnamese artists, living in Vietnam, who have had little chance to create exhibitions of their art. This program is open for application to artists born and currently living in Vietnam and over the age of 25.