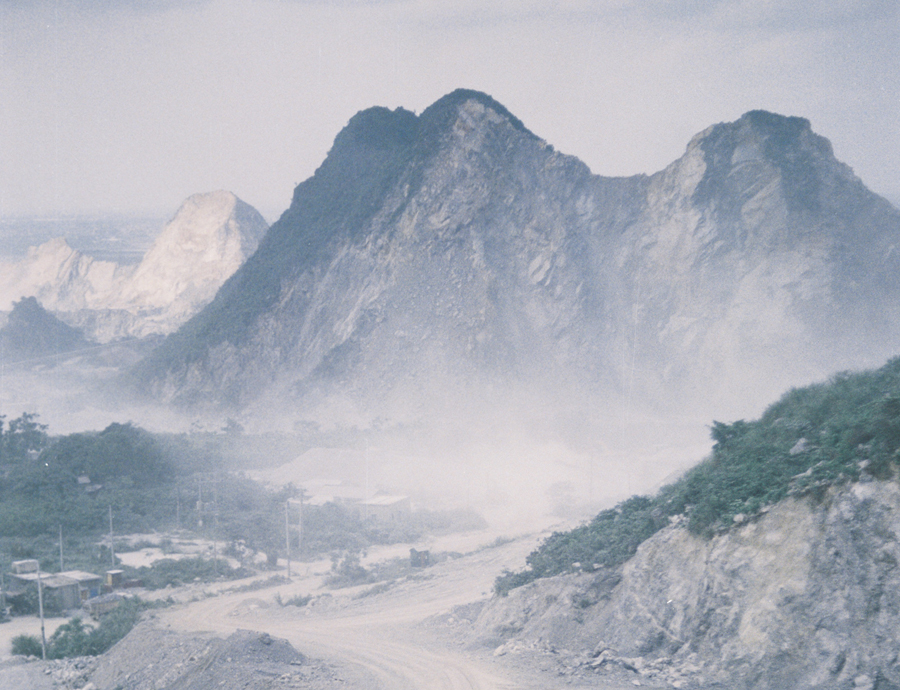 IN ONE’S BREATH – NOTHING STANDS STILL

“There is soil, bare soil
There is water, muddy water
This is where it all begins”

The project ‘In One’s Breath – Nothing Stands Still’ by Tuấn Mami borrows its inspiration from the ancient Mường* epic ‘Đẻ Đất Đẻ Nước’ (‘The Birth of Soil and Water’), from which immerses a belief that there is spirituality in all beings, that the creation of the world is constantly in a state of chaos, where humans struggle to cohabit harmoniously with other creatures, and especially with themselves. Conducted on the basis of the artist’s on-going fieldwork in the stone mining areas of his hometown, Hà Nam, since 2014, this multimedia body of work investigates and documents the pollution and significant loss of biodiversity caused by overexploitation of natural resources, and its devastating consequences on the structure of culture, and the people inhabiting this land.

The vectors that transverse the almost human-less environment of ‘In One’s Breath – Nothing Stands Still’ infers the greed of industrialisation and modernisation; the arrogant privileging of human desire, the violent decay of nature, and the irreversible decline of a society as it moves towards the ideal. From the grandioseness of the exhibition space and the sporadic arrangement of the works, to the cool and detached characteristics of the imagery – this exhibition points to a future after catastrophe.

Fragile traces of human existence are found
among landscapes in different states of ruin.
Is this the resurrection of heaven, or the start of a cosmic destruction?
The end of Mother Nature, or her new beginning?

This uncanny premonition of impending disaster is intensified by the dual visualisation of opposing qualities: stillness and movement, proximity and distance, silence and noise. It is as if a dystopia is casting its ominous shadow over everything as it hovers between dreams and nightmares, resurrection and extinction, past and future. By revealing a scene marked by both conflict and hope, and by making visible the unspoken and unheard reality of his land and people, Tuấn Mami demands us to face the ultimate truth: humanity, for all their reflecting, contemplating and scrutinising – is once again trapped in the destruction of their own makings.

*The Mường is an ethnic group native to Vietnam and is the country’s third largest of 53 minority groups, inhabiting the mountainous region of northern Vietnam.

-To ensure best viewing experience, please use the entrance on the Cafe side of The Factory.

-The first room of this exhibition is a video artwork, which will be shown during the following hours: