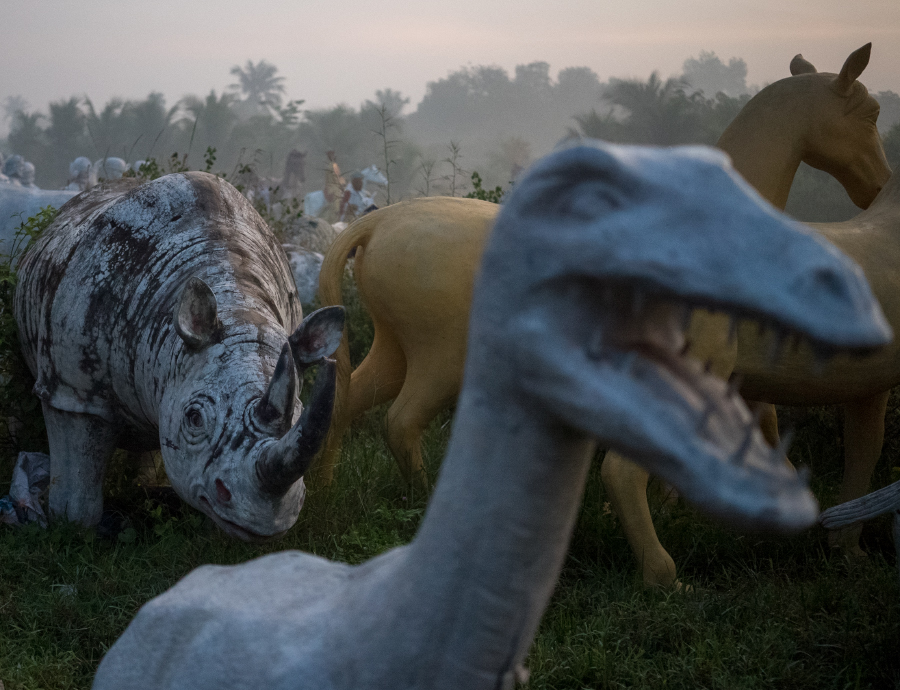 The Factory Contemporary Arts Centre is pleased to present ‘Empty Forest’ by Tuấn Andrew Nguyễn – a solo exhibition showcasing film, sculpture and photography – revealing a landscape where the industry of ailing spiritual beliefs is feeding the most wretched of human desires, to irreversible effect.

For this premiere showcase, Tuấn Andrew Nguyễn will transform the ground floor main hall of The Factory into a menagerie of animalistic forms, a kind of large-scale diorama where the voice of the endangered sits on the edge of extinction (or in particular case has already teetered into oblivion).  In ‘Empty Forest’, Nguyễn explores the impact of traditional medicine in Vietnam on the plight of such wondrous creatures as the pangolin, rhino, turtle and deer, fascinated by the role and shape of human spiritual belief in its once interdependently respectful, yet now destructive relationship with the natural world.

Nguyễn’s forest is a supernatural landscape of inanimate objects, perhaps likened as monuments to the undead, where these creatures are transmogrified into totems for the (soon to be) dismembered. The horn of the rhino; the antlers of the deer; the scales of the pangolin, the shell of the turtle – these are just a few of the deemed ‘magical’ elements within traditional medicine practice in China and Vietnam. Despite the fact that usage of such animal parts are scientifically proven as merely placebos, illegal poachers continue to ply the dying populations of these endangered animals knowing that they can earn an impressive sum from ‘patients’ endemically believing in the healing science of ‘faith’. It is to the ritual of consuming these beliefs that Nguyễn is ultimately perplexed and compelled, drawn to the performativity of adoration in the handling of these near mythical creatures (ie. the snake dance; the cock-fight; the pangolin hunt).

‘Empty Forest’ dives into the psychological and historical realm of this supernaturalism where Nguyễn continues his signature style of fictionalized dialog inter-cut with documentary footage and ‘found’ landscape, taking us on a journey into the present-day ‘wilderness’ of Vietnam, where the wild is a juncture between the original and its copy; between the living and the extinct; between the imagined and what remains. Via sculpture and moving images we see adoration for animal life that is at once awe and lust, where their environments, for those alive or represented (ie. embalmed or enshrined) reveal long-practiced, complex human ritual.

‘Empty Forest’ is the second phase of an ongoing body of research and work titled ‘My Ailing Beliefs Can Cure Your Wretched Desires’ by Tuấn Andrew Nguyễn.