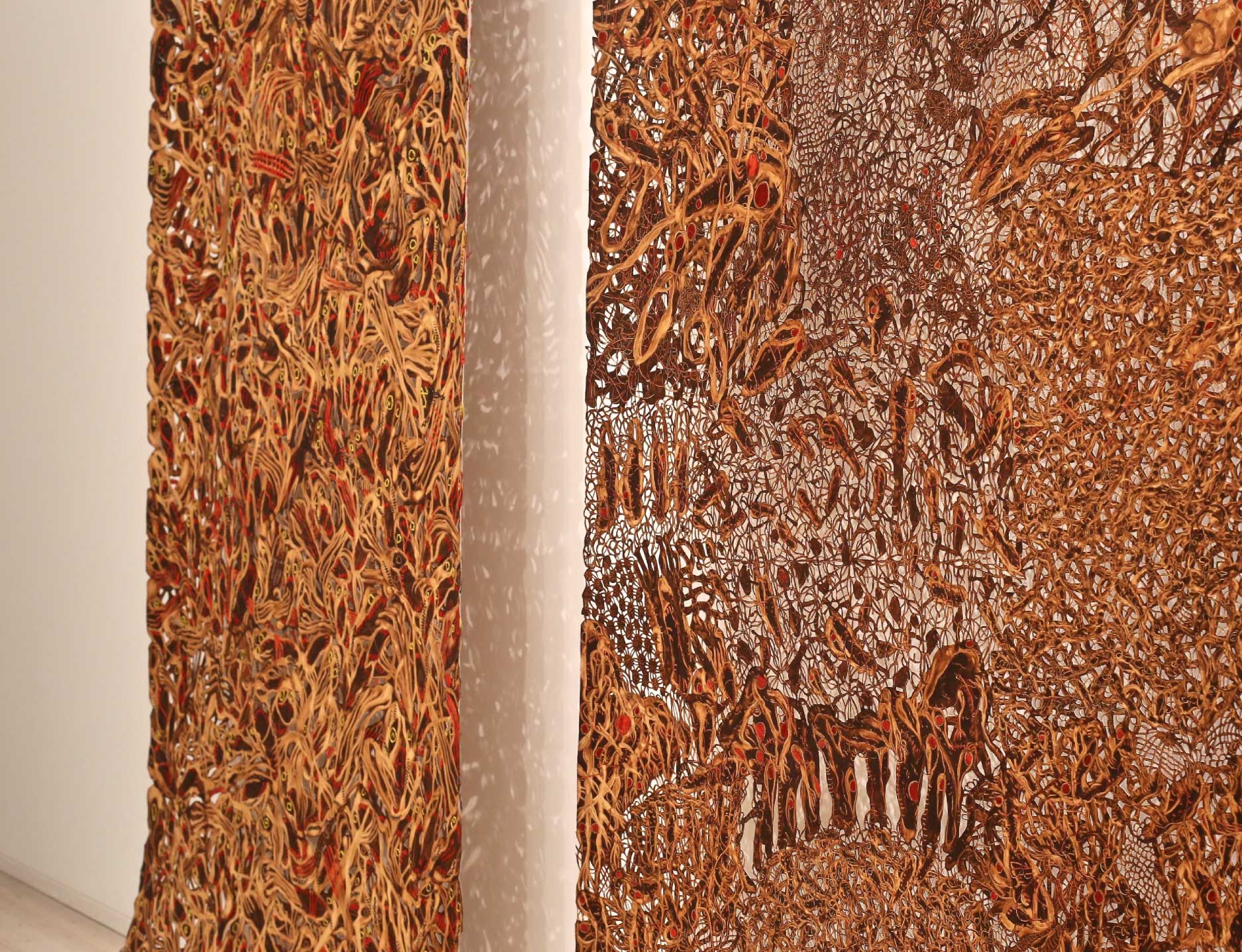 THE ORATION FOR TEN TYPES OF SENTIENT BEINGS

‘Painting is a mission vaguely relayed.
It is also a therapy, to unclog the mind and psyche
Or more simply, painting is an exercise.
In the end, it is as essential as eating, drinking, sleeping, breathing,…’

‘Oration For Ten Types Of Sentient Beings’ exposes the conflict-laden process of psychological transformation and artistic thinking of Phạm Trần Việt Nam, from 2011 to 2017. He is a member of a particular generation of artists in Vietnam who challenge their training in the plastic arts, daring to experiment in scale and material that can be uniquely displayed in the Factory Contemporary Arts Centre – the first purpose-built space for contemporary art in Vietnam.  Inspired by the literature of the great author Nguyễn Du* (1766-1820), the title of the exhibition reflects Phạm Trần Việt Nam’s frustration with an unjust world where humans are trapped in the cycle of life and death. Demons and corpses pervade the series of paintings on the wall, drawn in the period between 2011-2013. They resemble the artist’s scattered dreams and obsessions. Even though the color palette and composition emits a mysterious, even ominous tendency,  the essence and structure of the works however, appear quite elated. These paintings are a world in-between life and death, entrapment and liberation.

Between 2013-2017, the artist created large-scale paintings that stretch for several meters, suspended here in mid-air. Hung in this manner, in specific response to the architecture of The Factory, the light filters through the punctured patches of the paintings, creating shadows on the walls and floor. This transforms the two-dimensional surface of the paintings into three-dimensions, thus creating a deeper interaction between artworks and the site of The Factory. In these works Nam challenges the typical definition of ‘painting’, especially in the art historical and educational context of Vietnam, where practice of painting is understood simply as the use of brush and color to express an artistic idea (figurative or non-figurative). In this exhibition Việt Nam turns painting into sculpture, experimenting with a new approach to form and concept by also shredding his previous paintings and reassembling to form a ‘new’ canvas, using his fingers or cotton swabs to paint, subsequently puncturing the mistakes instead of erasing them. He carried out these experiments diligently, like a termite gnawing at his canvas subconsciously, starting from the corners and spreading to its center.

Ironically, while the scale of these large paintings may suggest a fascination with the world as a macro-system of life, the artist actually seeks to focus on the smaller details of human emotion. His creative process flowing naturally and incessantly like his own breath, which stems from his rumination on society and its injustice. Hence, re-structuring his old paintings and breathing a new life into them not only serves a concept, but it is also part of the artist’s effort to mend his inner psyche. In these later works, we can perceive a subterranean movement from death and destruction to hope for return and rebirth. In some ways, Phạm Trần Việt Nam’s art synchronizes with Nguyễn Du’s oration, as this poet used a form of eulogy to steer mankind into a righteous path so they can escape from karmic retribution of reincarnation.

The exhibition will open on May 20th and runs until July 13th, 2018 at The Factory. The exhibition catalog for ‘Oration For Ten Types Of Sentient Beings’, complete with curatorial text and artist interview with Phạm Trần Việt Nam, written by curator Trần Lương, will be available in July 2018.

*‘Oration for All Sentient Beings’ by Nguyễn Du consists of 184 lines, divided into three main parts: the first part depicts the somber scenery of monsoon season in July, often described as solemn and silently mournful…; The second part portrays in details ten types of forsaken spirits (1. Murdered kings and lords, 2. Esteemed women who took their life, 3. Discharged civil mandarins, 4. Defeated military mandarins, 5.Greedy people who die on the streets, 6. Power-hungry people who die dejectedly, 7. Vendors who die far from home, 8. Soldiers who fell on the battlefield, 9. Lonely prostitutes, 10. Those who die from poverty and catastrophes), also the main part of the oration; The last part provides a conclusion calling for people to follow the righteous path; walking under the light of the compassionate Buddha to avoid becoming a forsaken spirit or tormented demon.