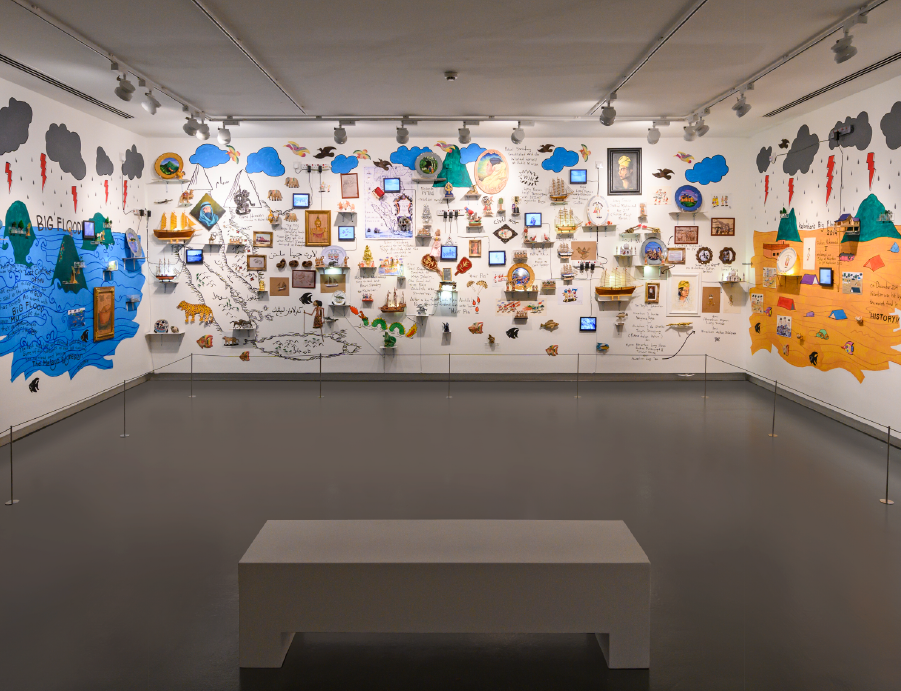 THE CARTOGRAPHIC WORLD IN ART

The desire to understand man’s place in the world has been the ultimate preoccupation behind the creation and utilization of maps. In the beginning humanity desired to understand the stars in an attempt to locate the Gods, which gradually gave way to the study of mapping as a science known as ‘cartography’. The discovery that the stars plotted distance on the Earth meant that, over the centuries, mankind has slowly crafted (with both brilliant and violent results) an understanding of our universe beyond the human eye.

Visual artists across the ages have been compelled by the role of such maps on determinations of faith, imagination, society, politics, spirituality and economy (to name but a few). They have also been intrigued by the tools and consequences of this journey of discovery, evidenced in a multitude of visual forms and processes – from astrolabes that demonstrate the earth is round, to papyrus maps enabled by the compass that measured the longitude and latitude of the seas and the continents they surround; to political doctrine that utilizes geographical charts that mark conquership of land denoting who owns which borders. In the post-industrialized era, mapping space became a mechanized science, with categorizations of place and people causing tremendous human upheaval (think the advent of slavery which was supported by scientists claiming color measured intelligence; or the creation of Kashmir, the most militarized zone of contested faith and territory in the world, as a consequence of Britain drawing a line on a map that carved an India in two).

In this lecture, the artists of the 21st Century, are of predominant focus, examining how cartographic documents, their tools and processes, have given rise to brilliant artistic investigations across vastly differing media: into the power of the spiritual world; as a means of reconciling cultural conflict; as a way of re-writing ‘H’istory; and in response to a need to more deeply understand the layered, migratory historical contexts, of our time.