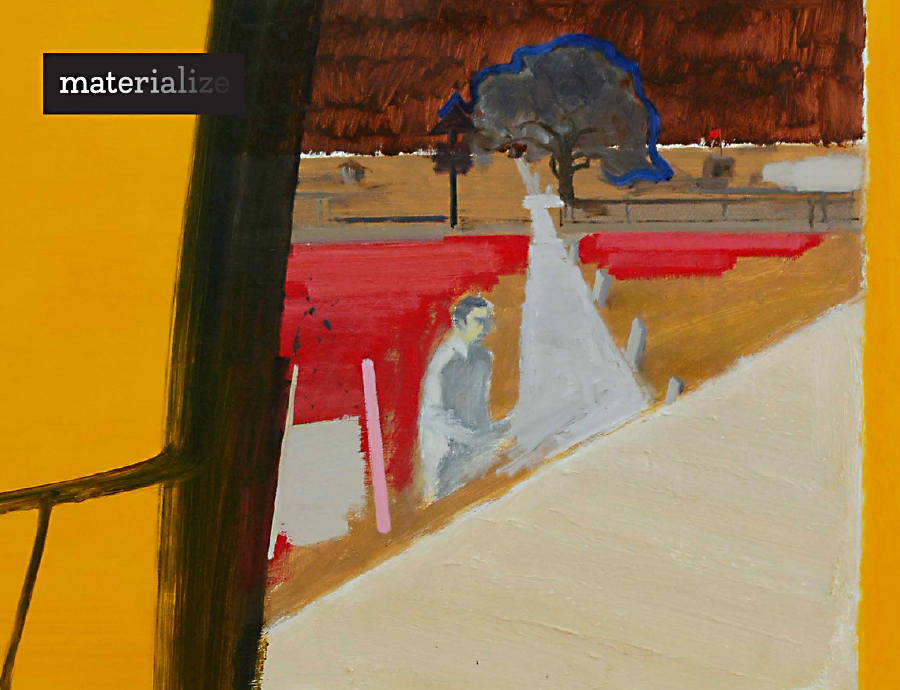 Despite growing up in a reunified country where a peace has been found, Lê Thế Lãm continues to ruminate on the remnants of war and the consequence of historical upheaval on the society in which he lives. He feels lost within the ramifications of a booming era of technology and economy, with its environmental pollution and human mental depression.

The exhibition ‘Remnant’ brings us into Lê Thế Lãm’s own world, where lies the sorrow and anxiety of living in post-war Vietnam. In this exhibition, Lê Thế Lãm’s paintings depict different states of a ‘silent death’, using the presence of closed coffins and lingering shadow-like humans, interspersed at times with words. These are fantasy scenarios played out in the artist’s mind, situated within various imagined environments that suggest an affliction with his surroundings. In addition to his dark palette, Lãm presents a combination of sculptural forms where particular light and shadow depicted in his paintings render the ambience walled and claustrophobic. Lãm is curious about the psychological impact of death, rather than focusing on biological forms of decay (ie. the decomposition of the body with famine, disease or the fatigue of war). In his art, Thế Lãm feels that the living are already in a sense ‘not-living’, they seem stuck and slowly withering away in a seemingly vast but actually constrictive life, laden with material burden in a silent spiritual destruction, where society grows too fast as the soul becomes impoverished.

In his sculpture series ‘The image of death will always be present inside an empty mind’, Lãm analyzes the bewilderment and anxiety embedded in the journey to the quiet land of death. Animal corpses are mummified in solid resin blocks as fossils, preserving the image of the past. Here, death is laid bare alongside various newspaper print, a symbol of different media flows that co-exist and influence the consciousness of people in today’s society. “Human’s destiny is to progress; But all the research will be meaningless and the result will be catastrophic if that movement leads to a recession of morality. What does technical progress mean if it kills spiritual life?” [1]

Lê Thế Lãm is the third artist to take part in ‘Materialize’, a program initiated by The Factory, co-sponsored by Indochina Arts Partnership. This program aims to provide exhibition opportunities for Vietnamese artists, living in Vietnam, who have had little chance to create exhibitions of their art. This program is open for application to artists born and currently living in Vietnam and over the age of 25. The next round of applications will be sought in December 2017.

With co-sponsorship and support from: