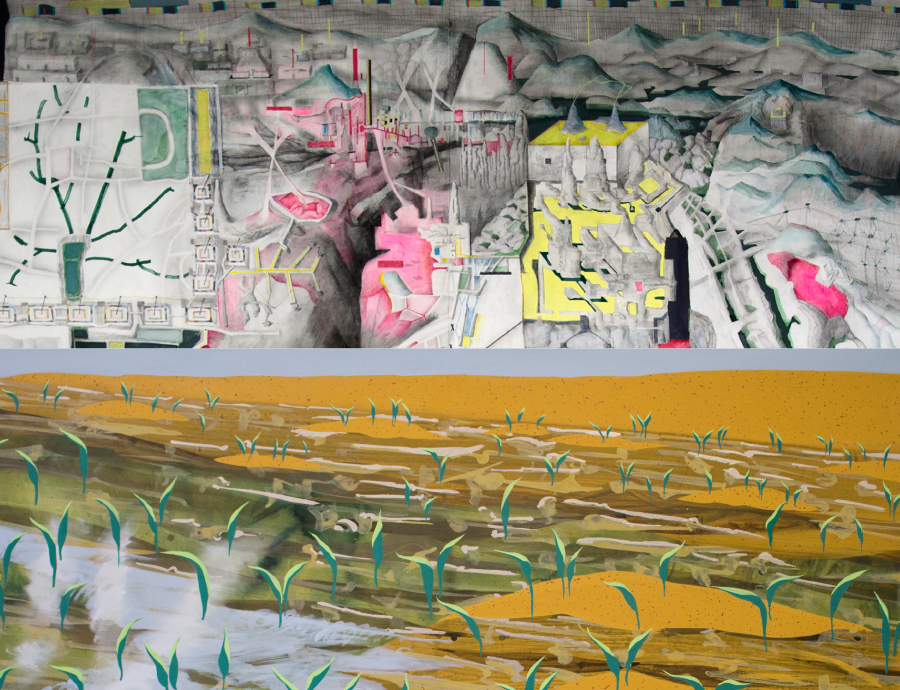 How are our lives guided by the tools and stories we inherit? How are artistic imaginations re-determining the value and significance of these often presumed cultural legacies? In Necessary Fictions two artists explore the role of cartography and myth, their command of illustration within the painterly medium – across canvas, paper and wood – unveiling two distinct surrealities. Artists Tammy Nguyễn and Hà Ninh Phạm respectively reveal the architectural and anthropomorphic dimensions of desire – their images playfully morphing the worlds of human, flora and fauna – revealing the study of time and morality as a deeply flawed, exploitative landscape whereby human whimsy often rules supreme.

For thousands of years, mapping the world has been an integral part of human intrigue. Maps help broaden the horizon of our mind, aiding the identification of star constellations, the discovery of new terrain, and the exploration of other cultures. They show how the world was laid out at a particular time, of how different peoples perceived the earth (and heavens) – physically, mentally and religiously. Maps are a source of wonder, but they are also tools exploited for the purpose of power, telling others where they can or cannot go, stifling human movement, restricting activities within specific place. Similarly storytellers, since the dawn of consciousness, continue to be socially and culturally valued as educators and seers, their words craftily juxtaposing various human action and inaction, revealing human fallibility and prowess. Such stories (think Ovid, Shakespeare, Confucius, Rumi, Ferdowsi) continue to be of critical relevance to contemporary life, though often sadly instrumentalized by individuals and corporations who corrupt the representation of their ethical and moral compass. Between map and story, such tools are intimately connected to the experience of reality, daring to record and analyze its occurence.

Hà Ninh Phạm’s painting series My Land (2017 – on-going) is both a project in progress, and a world in formation, where numerous visual narratives surrounding an imagined universe are continually given birth – growing, maturing, pollinating – into something yet to be brought into full existence. With its own systems of logic, metrology and history, expressed through its narratives, maps and visual codes, My Land invites us into the private territory of the artist, on a dream voyage across sea, castles, villages and farms, past otherworldly terrains that resemble lands out of fairytales, scenes from sci-fi films, or places of futuristic planets. Here, we’ll find that the ending of one story may mark the beginning of another, and that looking at one minute visual detail can transport us into an entirely different space-time dimension, another world. Like archeologists, we are invited to excavate this terrain, looking for buried remnants and clues, in order to perhaps understand a (fictional) history. Like dreamers, we are asked to strip away all pre-existing experience and understanding of the real world, to immerse ourselves fully into the make-believe, perhaps so that the journey to explore another world – where we hope to live – could begin.

Across the painterly vivid, illustrative landscapes, still life tableau and rotating sculptures of Tammy Nguyễn, repeat motifs unfurl – eye-balls blink, roll, peek from leaves crying for air; where human skin mirrors the ochre of land, the plight of both species under interrogation for their color. Here flora is under duress, not only from environmental neglect, but from a great tide of human imagination that has failed to understand the symbolic narratives of this habitat. Desire runs rampant as masks masquerade decay, as the search for the sublime sees the plunder of far distant lands, as presumption of power bleeds with the violence of conquership – in Tammy’s images the aftermath of such human greed commands. An oscillating metaphorical conversation between faith, science and Capital; referencing textual insights from Ovid, to Blake, to Swift, to mythical legacies of Nusantara: what is ultimately gleaned in her images is humanity has learnt naught from such seers, instead walking blindly from generation to generation in a ceaseless love affair with its own image.

In as much as maps and myths respond to historical and social architectures, the influence of such artforms relies on their ability to impress conscience inward, to paint human production as both physical and imagined structures, as necessary fictions. The bodies of works by Tammy Nguyễn and Hà Ninh Phạm in turn remind (and warn) us of the significant strengths (and dangers) of the human imagination, a miraculous potential that can store and transmit information across time and culture, which in the right minds and hands could repair, destroy, or transform the reality in which we live.