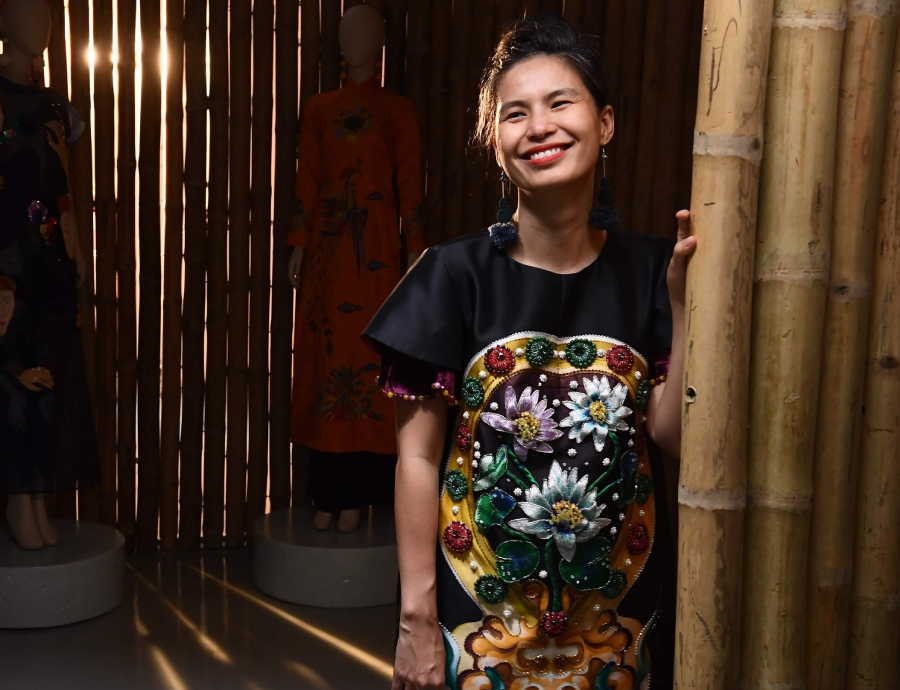 Thuỷ Nguyễn is known for her eclectic style, particularly her emphasis on form and construction, ornamentation, exaggeration and flamboyance. ‘Thuỷ Nguyễn – An Everyday Dream’, through its dramatic mise-en-scene, as well as the display of intricate garments, sheds light into this designer’s world of imagination where folklore, colour and ideas of feminity are interwoven.

As clothes are a map of our past and present, Thuỷ’s collections are also, above all, autobiographical. Wherever Thuỷ travels, she pays attention to the fragments of the past such as vintage fabric, old postcards, intricate hand-made accessories and decorative arts; collecting them and using them as sources of reference. Additionally, Thuỷ continously pulls from her personal memories, creating a coherent, multi-layered story for each of her collections, pulling from various forms of vernacular knowledge, such as folk poems, music, performing arts, fine art and spiritual rituals. Such cultural currents are then transformed into details such as her sap-green hand-woven buttons attached to the shoulder, waist, or trousers’ waist; her meticulously embroided patterns; and her reconstructions of the áo dài – her eternal inspiration. This conversation with fashion editor, Nam Thi, will open up Thuỷ’s creative methodology, in which she extracts, references and recreates symbols and motifs that are present in everyday (social and spiritual) life into her own unique ensemble.

This talk is a part of the public program in association with the exhibition ‘Thuỷ Nguyễn – An everyday dream’, co-produced by The Factory, supported by TOONG (promotion) and Hoa Sen University – Faculty of Design and Art (venue).

➖ Artist/ Fashion designer Thuỷ Nguyễn graduated from the Vietnam University of Fine Art, Hanoi and gained a PhD in Fine Art from the National Academy of Fine Art and Architecture, Kiev (Ukraine). Despite not receiving formal training, Thuỷ boldly embarked on her fashion journey by opening up the first Thuy Design House store on Đồng Khởi, Saigon, in 2011. What contributes to her success is the qualities of true feminine beauty found in her designs; the usage of bold colors and creative combination of different types of fabric – all of which helps to bring out and depict what it means to be a contemporary woman in today’s Vietnam. Thuỷ is committed to exploring traditional Vietnamese cultural heritage. Her collections often take inspiration from historical textiles, artistic handicrafts and ceramics, paintings by 20th century Vietnamese masters (who graduated from The École supérieure des Beaux-Arts de l’Indochine), and especially the áo dài – a symbol of Vietnamese culture – amongst other traditional fashion accessories.

The diverse range of Thuỷ’s creative practice can also be seen through her role as producer (and costume designer) of several films such as “The Tailor” (Cô Ba Sài Gòn) – a romantic comedy highlighting the old Saigon lifestyle through the evolution of the áo dài. Within the artistic community, she is known as ‘Tia-Thuỷ Nguyễn’, particularly in her role as the founder of ‘The Factory Contemporary Arts Center’ in Ho Chi Minh City, established in 2016 (the first purpose-built space for contemporary art in Vietnam). In 2019, Thuỷ was listed as one of the fifty most influential women by Forbes Vietnam for her work and contribution to design, visual arts and creative business.

➖ Poet/ Fashion editor Nam Thi is a poet born in Hanoi and graduated from the Academy of Journalism and Communication with a major in Philosophy. He is currently editor at L’Officiel Vietnam magazine. For Thi, poetry functions as a sanctuary for the mind, for “in times of difficulty, it is where we seek refuge.” Thi often uses highly symbolic and visually-imbued language to tackle and reveal the depth of his psyche and subject matters. He considers poetry an art of language, a tool that allows words to be free from being commodified, commercially consumed, or confined by linguistic boundaries. In his poetry, Thi lets words wander; he strives to make them uncanny, and in doing so, recalls their familiarity. In 2019, his poetry was selected to feature in the ’Subtitle: Southeast Asian Short Film Festival’ zine (Chicago, US). During the 2020 Lunar New Year, Thi hosted his first ‘Performing Poetry’ night, where he experimented with fusing poetry and indie music.