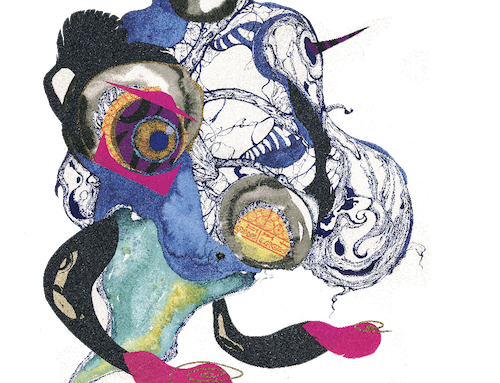 Kenny Ng’s first solo exhibition, titled ‘lamina | ink’, will showcase a series of abstract characters, inspired by the diverse shapes and forms of mysterious deep sea organisms, combined with colonial and old temple architecture of Ho Chi Minh City. The architectural lines of these drawings tell a story of history and culture, both familiar and strange to Kenny, a young artist who returned to Vietnam in 2015, after 7 years studying and living abroad.

Throughout his university years, Kenny’s practice centered on printmaking and book-making, requiring the combination of many different types of material, especially paper. His love for paper, especially those originating from East Asia, such as the Vietnamese giấy dó or the Japanese kitaka, stems from their thinness and ability to absorb ink. On the surface of his artworks in ‘lamina | ink’, one can easily see the appearance of funerary gold (used in offerings) bought from Thai Nguyen (his mother’s hometown), as a link to his roots. For Kenny, this type of paper passed down through the generations from mother to son, from son to artwork, creates a parent-child thread linking Kenny with  the organisms he paints.

Soon after returning to Vietnam he began travelling around South East Asia, observing and taking note of typical motifs in the design and construction of temple domes, or the pillars and ventilation bricks of colonial buildings. Many of the structures that he visited are no longer in their original condition (ie. destroyed or badly renovated), such as the Binh An People’s cemetery (Binh Duong), Giac Vien temple (Sai Gon), Kien Trung Palace (Hue), Ta Prohm (Siem Reap) to name a few. With sensitivity and nostalgia, Kenny transforms these architectural layers as ‘skin’ for different imaginary creatures who ‘live’ or ‘hide’ beneath the evidence of time – an architectural landscape embodying differing history and social upheaval – similar to the way we live in Vietnamese society after many years of colonial influences.

Sponsored and organized by: