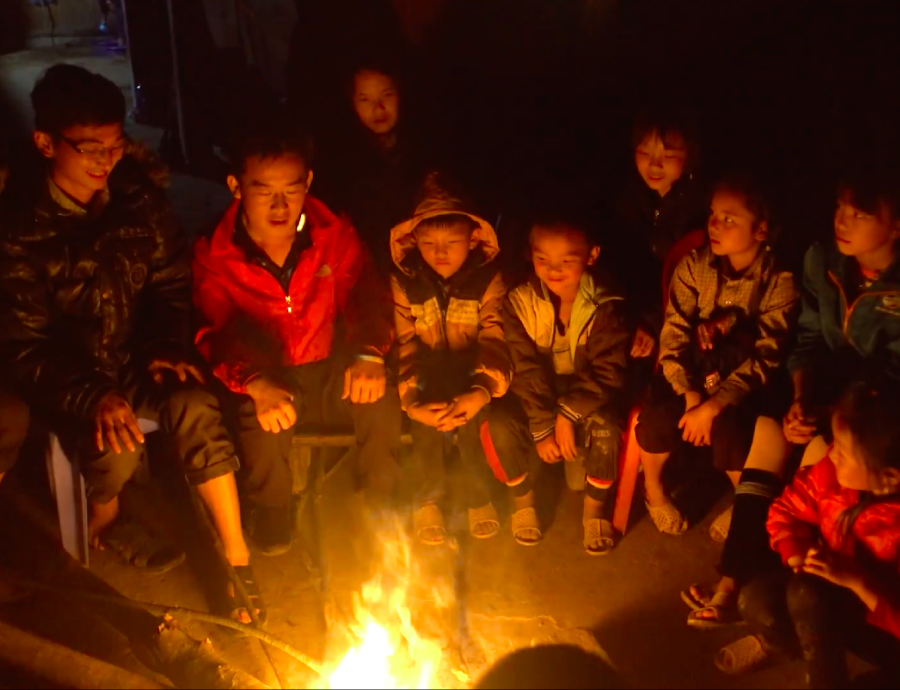 HAIS LUG NRUAG: HMONG TALES AT THE HEART OF THE CITY WITH TUAM KHAAB

“Like many other peasant Hmong children born in the 1990s, when I was small, I was occasionally told many fairy tales by my parents, grandparents and other close relatives like aunts or uncles. It was usually just before dinner, around the fireplace, the children were helping the adults pick corn and husk while attentively listening to tales told by the adults. It was when there was no electricity, no day-boarding school, and even no schooling at all. Every night, the children would be sleeping around the adults, nagging them to tell them amusing bedtime stories with rhythmic intonation that gradually lulled them to sleep. Those were stories about animals—a duck with a beak flatter than a chicken, a buffalo with a horn but without the upper jaw, a horse that has teeth but no horn, a monkey with a wrinkled face that doesn’t dare to get to the ground, or a lenient fox. Those were stories about Hmong pan pipe, the pea tree, the corn tree, the rice tree. At times, those were also stories about brotherhood, about an orphan, about the mythical kings, and the gods in Hmong belief.

Later on, when I went to boarding school, living far away from my family, from my hometown, far from the stories that gave me much nostalgia, I soon came to the realization that the space for ancient tales were slowly swirling in oblivion in parallel with the development of electricity, of television, of broadcasting, of journalism, and especially of the schools that teach Vietnamese. When I grew up, I started to feel the necessity. However, despite the fact that the ancient folk tales were often word-of-mouth stories with casual language and typical everyday life imagery, for one to understand the multilayered meanings is not an easy task. Underlying all of the simple images and symbols is a complex system of interwoven spiritual values, which constitute Hmong sentiment, culture and worldview. It is this cultural capital consisting of Hmong system of beliefs, social structures, traditional customs that Hmong philosophy and perspective are created, passed on, and preserved from one generation to the next.” (excerpt from ‘Stories around the fireplace’ (2017) edited by AHD)

Due to the loss of written language during their migrations, Hmong people could only preserve their history, knowledge, cultural values and rituals through folk tales, songs, melody, funeral and wedding songs. Among them, folk tales and fairy tales are the most popular forms, thanks to their simplicity and their acceptability for different variants. With one story, there could be countless different variations each time it is told by another person. The total number of Hmong tales are myriad, however, they all surround some emblematic figures and narratives, in which the most central characters are often the orphans—usually meek, kind-hearted boys and girls fighting against evil. From many stories we can see two common narratives: one that interpretes culture and life; the other that introduces figures and imagery emblematic of their culture. Whichever motif the stories share, Hmong tales all aspire to encourage creativity in education, learning from past experiences and lessons learnt from previous generations, guiding them towards freedom and happiness. With the richness of Hmong tales, Tuam Khaab, one of the editors of ‘Stories around the fireplace’ (2017), managed to introduce three branches of Hmong tales including: ‘Great Flood and the Recreation of the World’ on Hmong history and humankind; ‘Stories on Hmong pan pipe’ on the interpretation of Hmong culture; and ‘Stories of Ruam and Ntse’ on nature and human.

In the program for The Factory, ‘Hais lug nruag’ (literally translated as ‘Listening to the telling of tales’)  we are delighted to invite Tuam Khaab, to come to share personal tales and memories which are dotted with his collective knowledge passed on to him by revered village elders. Here, tales are not only a bedtime activity for children, buta spatial and temporal dimension born of myths and fantasy of a self-governed, liberal and poetical culture. With this attempt to reinvigorate such a space for storytelling, could the embedded values in the old tales be passed on to future generations? Amidst the ever changing world we live in, would it be able to find consolation in, and look towards the indigenous wisdom of the present day? In ‘Hais lug nruag – Hmong stories at the heart of the city’, you are invited to immerse yourself into Tuam’s intimate space of Hmong tales, be the ears of an ardent lover of myth, and an active contributor of ‘Stories around the fireplace; and together discuss with him the role of tales in our contemporary life.

This program runs in association with the exhibition ‘Necessary Fictions’ by Tammy Nguyen and Ha Ninh Pham, currently on view at The Factory, in which the artist Tammy Nguyen also takes inspiration from (Greek) mythology to interpret contemporary life.