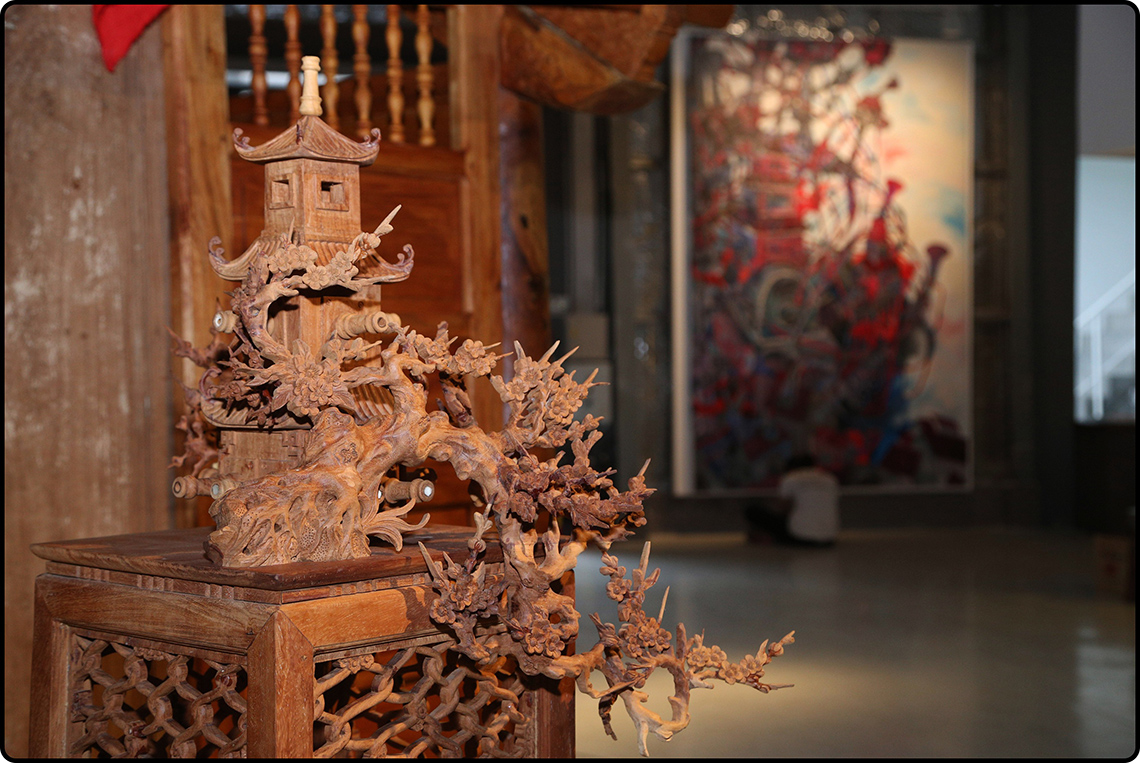 ‘Dislocate’ is a solo exhibition by acclaimed Vietnamese artist, Bùi Công Khánh. It will be his largest and most ambitious art installation to date. Walk into the world of ‘Dislocate’ by Bùi Công Khánh and the wood of the jackfruit tree springs to life referencing a myriad of social and cultural histories concerning Vietnam in style and subject. A stunningly carved fortress sits center-stage; its beams, decorative panels and windows recalling the magnificent architectural traditions of Hue (the ancient capital of Vietnam). Surrounding this fortress stand four spiritual ‘guards’ miniature pagoda ensconced within bonsai representing the cycle of the seasons.

Working with a team of senior expert wood carvers and carpenters from Hoi An over a two year period, ‘Dislocate’ embraces a complex interwoven set of narratives that pivots around this ancient city on the central coast of Vietnam a city at the heart of Bùi Công Khánh’s practice and family history.

‘I grew up in Hoi An, in the central coast of Vietnam, which was built by Chinese migrants in the seventeenth century. They arrived in Hoi An as political refugees. As a child I considered myself Vietnamese, until I turned 20, when my father revealed my true origins: my great-great-grandfather was from Fujian, China. Considering the ongoing political tension between China and Vietnam, I began to ask: Which place do I belong?

‘Dislocate’ is an architectural installation made from the wood of the jackfruit tree – a species common across South East Asia. It is both a home and a fortress; a bunker and a shrine. It celebrates my family’s carpentry skills from Fujian, whose exquisite stylistic contours have been combined with the local cultural identity of the central Vietnamese region, creating a distinctive art and architecture for Hoi An. It also hints at the religious and military mechanisms of Vietnam today, systems in part inherited from China, to reveal the complexity behind not only my own cultural identity, but that of my country. We may want to look at our reflection and see a ‘Vietnam’ but we must acknowledge how many differing narratives compose the idea of this nation.’

Bùi Công Khánh is an artist deeply fascinated with social assumptions of authenticity and cultural heritage. As one of the first local artists to gain an international reputation in the 1990s, with his performances questioning restrictions of individual expression in Vietnam, Bùi’s multifarious practice has since embraced painting, sculpture, installation, video and drawing with successful showcase across the South East Asian region and beyond.

‘Dislocate’ is curated by Zoe Butt, Executive Director and Curator, San Art. This exhibition forms parts of a larger artistic endeavor called ‘Conscious Realities’, initiated and organized by San Art in partnership with the Prince Clause Fund. San Art is pleased to cooperate with The Factory Contemporary Arts Centre in Ho Chi Minh City in the showcase of this significant work, which will next be showcased in the forthcoming Singapore Biennale 2016.