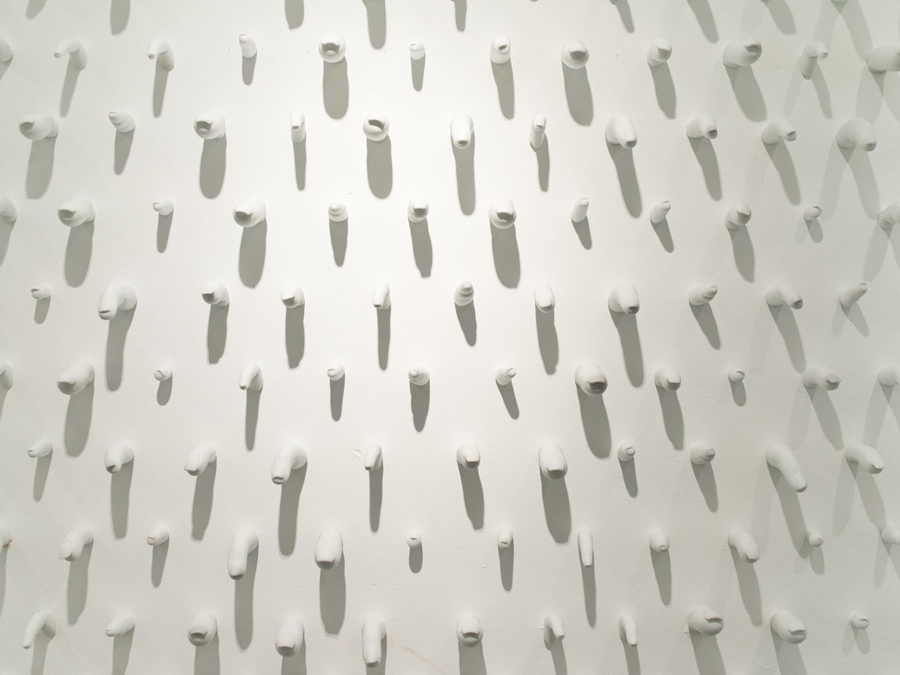 Growing up in Vietnam in the 1980s – 1990s, when manga was newly imported and of rising interest  in the country, Lê Hoàng Bích Phượng was inspired from Japanese popular comics such as Doraemon, Maruko and Sailor Moon. “Painting is like writing a diary, the only difference is memories are captured by painting language on a surface without lines…”, she said. Since the very early stage of her artistic career, Bích Phượng has passionately pursued an  artistic practice using traditional materials. Her watercolor painting technique is meticulous. She approaches art-making intuitively, as if she was having a conversation with her innermost feelings while patiently layering colors on silk, until attaining the most satisfying tone and color gradation.

In the series The Potato’s Portrait  (2016), Bích Phượng keeps the lightness usually found in her previous paintings. Her strong command of line and color creates graceful, ethereal compositions but presents a strong and drastic idea. She relates the connection between soil, potato and ambition of humanity in a very unique way: “…soil represents the human body, the image of life. Potato, a nutrient-dense vegetable, may possibly become poison for us. Apart from digesting nutrition to supply the operation of the human body, we also consume an enormous amount of dreams to maintain a spiritual life. Potatoes are like dreams growing inside us. Harvesting them at the right time may offer an abundant crop, but sometimes we would like to keep hope to grow them bigger under the ground. When dreams are getting bigger they soon become greed, just like when a potato sprouted, its nutrition becomes poisonous. This toxin spreads insidiously and grows with time. The soil which gave life to  good, could have also raised the bad. From there, the circulation continues, like karma.”

This exhibition is also a new experiment for Bích Phượng to challenge herself, combining new ideas about the ethereal correlation of karma in Buddhist ideology with Vietnamese traditional porcelain techniques. She creates a ‘world’ in which the installation Milky Way (2015), includes 999 index fingers, all handmade from white porcelain with the support of talented traditional artisans from Bát Tràng village These are lined on a white wall as a long chain of critiques, ambitions and orders, pointing at us. Each finger is like a small planet in the Milky Way, just like the tiny existence of humanity in the universe.. In this ‘universe’, there also is a Black Hole (2015), an installation of 4 pomegranates on which many golden fingers parasitized and distorted, displayed on a white pedestal in darkroom. According to ancestor worship culture in Vietnam, pomegranate represents fertility and abundance; gold represents eternity and perfection. The fingers sprouted on the pomegranate is symbolic of the greed and selfishness exhausting the subsistence of life.

To Bích Phượng, all of us are as random as the creation of planets. Born, then strung together in a cluster like a galaxy, an asymmetrical chain. Following our creation, we are impacted and influenced by each other. Like asteroids, actions create sequences we can at times anticipate. Other impacts set in motion unintended consequences. We seek and chase the broader spaces. We pay no mind to the effects they may cause surrounding planets. Somehow, we deviate from the universal system of order. Our path breeds jealousy, as we seek greener pastures just over the horizon. It is her belief that peaceful consciousness instills order. It is in fact our forgotten ‘promised land’ – abandoned in pursuit of meandering dreams.

The artist would like to thank  The Vietnamese – Danish Culture & Development Exchange Fund (CDEF) for production support.