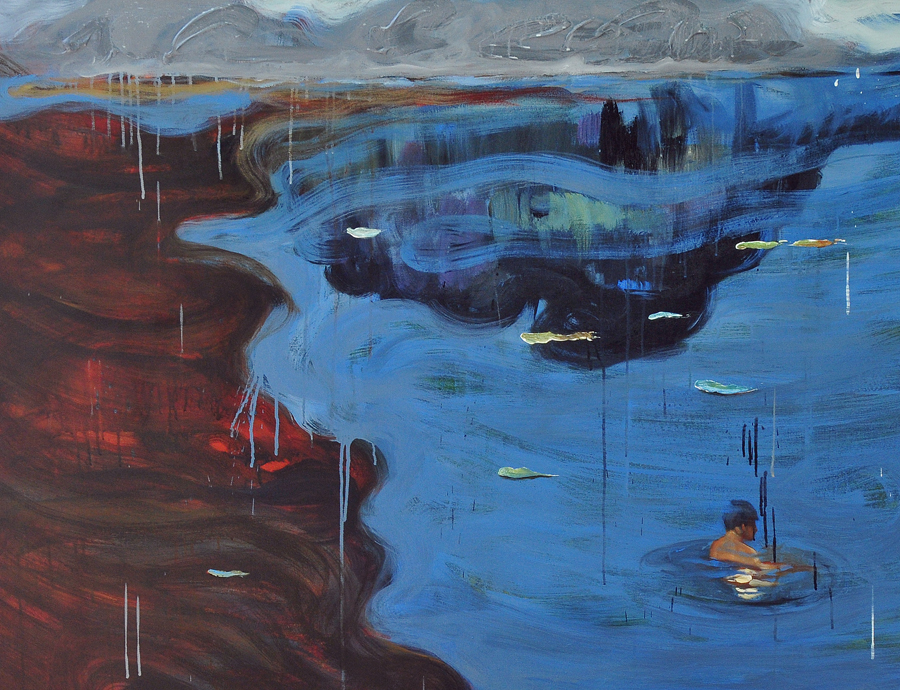 ‘Broken Relationships’ is an investigation, by Nguyen Ngoc Thach, into the chaos of the current world order and the loss of ethical ground in the human-to-human social contract. With his adept painterly treatment of the aesthetics of landscape and the realm of the psyche, Thạch humbly captures the anguish of the human condition, unwaveringly confronting his own discern of trauma and suffering.

In ‘Broken Relationships’, the artist’s reminiscence of his childhood memories spent in Quang Ngai, his father’s migration from the North to Central Vietnam in the 1970s, and his current life on the periphery of Saigon, have given shape to this exhibition, which consists of three series of paintings (twelve images in total), of acrylic on hessian fabric. An array of non-linear spatiotemporal panoramas altogether exudes a dystopian atmosphere in this body of work — a desolate seashore at the dead of night (‘A Horn-eyed Ghost Crab’); a withered, decayed farm plot thirsty of its past vitality (‘Thirst’); a filthy canal sprinkled with people swimming, in seeming bliss (‘Black Tide’); an emptied, hollow construction filled with dusty darkness (‘Bleak Windows’); a stained dirty glass pane washed with streaks of rain (‘Dust’). With wet-on-wet technique (spraying the painted surface with water to desired effect) Thach’s scenery tosses into life and starts sobbing. In his paintings, human bodies appear in a state of powerlessness, as silhouette, sometimes in complete absence, as if swallowed by the vastness of the devastating landscapes. Be it humans in despair or landscapes in ruin, all are stuck in limbo: somewhere between what they yearn for, and what reality has to offer.

For Thach, art is not only to compress fragments of life onto canvas (especially in times of normalized inequality, as the artist phrases it), but also to seek to understand the intangible relationships and moral boundaries among his depicted subjects. Who, and for what, are we held responsible or accountable for our actions? In ‘Cold Grey’, Thach confronts a coordinated front of men, all dressed in high-necked suits with white collars, which are so aggressively smudged/smeared/splashed that their identification becomes anonymous. Interestingly, while the ‘Portrait’ series defies the authoring of any real person, they still fulfill the mediative role of reflecting and revealing the tension (between those of power and those in powerlessness) among Thach’s subjects. Reminiscent of Marlene Dumas or Francis Bacon in its haunting treatment of paint and composition, the ‘Portrait’ series possesses repetitive motif of an explosive mouth (‘Untitled 2’); blood-stained and tortured (‘Untitled 1’) or sinisterly half blindfolded faces (‘Untitled 3 and 4’)— each canvas screaming, bursting in terror, tears, shivering in fear—all these paintings reveal human vulnerability in their darkest times of wounded suffering. The ‘Portrait’ series was the first to be developed for this exhibition, these paintings taking root with the legacy of ‘action painting’ (a post-World War II movement of the 1940s, which emphasized the physical act and gesturality over the final result of the paintings); and the early figurative art of a revered Vietnamese painter Đỗ Hoàng Tường, whom the artist particularly credits with great respect. Here with his own portraits, as if in imagined conversation with so many world renown portrait masters, he employs paint brushes invented from ordinary objects or found by chance—for example, an ordinary kitchen knife or the ‘caulker’ (a mason’s tool that was absentmindedly left at his house after reconstruction) –  tools with function to scrape, smear and flatten; techniques that the artist claims as describing his conceptual frame for examining his social world in this exhibition.

Nguyễn Ngọc Thạch’s ‘Broken Relationships’ reveals the artist’s anxiety towards contemporary life in which the social contract that binds humanity together as a society is broken, in which our ethics are packaged as commodity, in which our conscience is alienated from our labour. While blame is always easier than any attempt at understanding, Thach offers us a moment (both calm and intense) to enquire, to ask ourselves how we each engage this chaotic matrix of global social order. As J. J. Rousseau once suggested, since no man has natural authority over his fellow, we are left with only agreements; thus on which grounds then should we agree upon, before entering any social relationship?