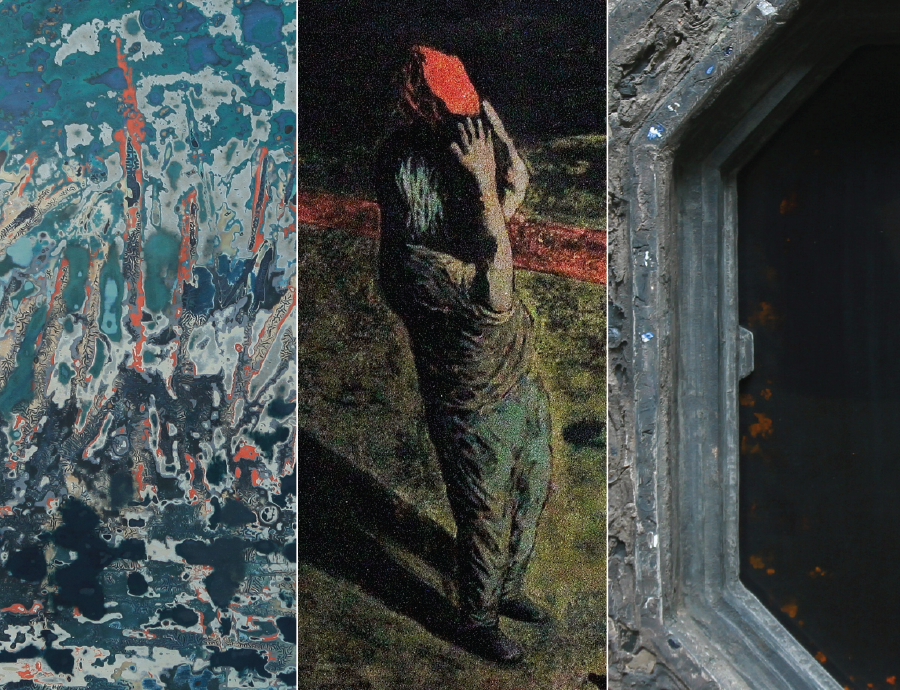 Objects of lacquer in Vietnam are recognized as a national cultural form with a history of more than 2000 years. Paintings composed in lacquer are a part of this celebration, though its history of practice begins in the early 20th Century.

Much writing on the history of lacquer in Vietnam extols the technique and mastery of sơn rừng / sơn lắc (wax-tree sap) – scientifically known as the Rhus succedanea tree. The process of applying this sap to particular wooden surfaces involves multiple layering, at times up to more than ten applications, in order to achieve luminosity in color. Dependent on particular oils utilized, this sap changes in color and density, further altered by select processes of rubbing/adding additional elements to the lacquered surface.

The origins of lacquer production in Vietnam differ according to source, but one popular common tale dates to the Later Lê Dynasty (1443-1460), ‘…. [where] a Vietnamese mandarin named Trần Tướng Công…. was sent to China as an envoy and during his time there he studied lacquer techniques in Hunan (China). On his return home, he taught the trade to the people in the capital city. There is still a temple in the village of Binh Vong dedicated to his memory. Ancient lacquer guilds called him ‘the forefather of the lacquer industry, and meet once every year to pay tribute to him’

In the early 1900s, French scholars note that Vietnam was a ‘paint-producing’ country, with much of this sap being produced not only for local artisanal use (the surface of many domestic object – from furniture to jewelry); but also exported for Chinese consumption (a market that did not fail to be noticed by French colonial interests and thus this wax-tree was subsequently planted in abundance).

However it was upon French painter Joseph Inguimberty’s visit to the Temple of Literature in Hanoi in c. 1925 that is said to have brought the practice of lacquer into the realm of the ‘Fine Arts’ in Vietnam. Appointed Lecturer of Decorative Arts that same year at the newly established École Supérieure des Beaux Arts de l’Indochine, in Hanoi, Inguimberty is claimed to have been awestruck by the color of the temple’s architecture and objects, its lacquered surfaces of an age ‘immemorial’. It was not long after, that ‘Vietnamese traditional lacquer’ became a key subject classed as equal to painting and sculpture, its experimentation moving beyond the perceived capacity of oil at the time. It was within this department that artists such as Lê Phổ, Phạm Hậu, Nguyễn Khang, Trần Quang Trân ‘… were the first students to study lacquer. They made new changes in style, relief, and carving techniques, turning from making lacquered boxes, trays, horizontal lacquered boards to painted landscapes’; whilst also studying Japanese techniques of sprinkling gold and silver dust on motifs. It is intriguing that lacquer rose to prominence in Vietnam via French institution, only to subsequently be celebrated by Vietnamese people as an art form demonstrating national character – its figurative landscape subject matter greatly appreciated in a newly emerging Social Realist Vietnam.

Indeed such was the energy towards the glowing depiction of agricultural life that artists in North Vietnam (following the success of the defeat of the French at the Battle of Dien Bien Phu in 1954 and the subsequent rise of Communism) were provided with necessary materials for the creation of monumental landscapes in lacquer (such as ‘Bronze Wall of a Nation’ 1967-68 by Nguyễn Sáng, in the collection of the Ho Chi Minh City Fine Arts Museum).

Late historian Bội Trân Huỳnh-Beattie comments, ‘All the hardships and devastation during the war did not hinder the development of lacquer painting, a difficult medium; furthermore, the government commissioned artists to work in this medium and allocated the ….  materials in advance. The focus on lacquer as an artistic form grew from the success it gained in colonial days and the intention of preserving tradition for the purpose of a ‘national form’.’

Today the practice of lacquer painting in Vietnam is limited. While it continues to be mandatory study for undergraduate students majoring in painting, very few pursue the art as a focus in their practice, perhaps in large part due to: heavy restrictions on any form of experimentation in technique or concept during study; and lack of economy and space for what is actually quite a lengthy toxic production process. However, despite these potential obstacles, there are a number of dynamic contemporary artists who are returning to its luminosity.

This display for Galeria, showcases three artists who experiment with lacquer, whose compositions delve into literal and abstract preoccupations. Nguyễn Trần Nam’s brooding scene shows the psychological inheritance of remnants of war; Lê Thừa Tiến immerses his love of lacquer in sculptural ideas of density and conceptual reflection; while Vũ Đức Trung renders lacquer as pictorial abstraction, his color and motifs likened to scenes of Spring.

An introduction to lacquer in Vietnam
Zoe Butt