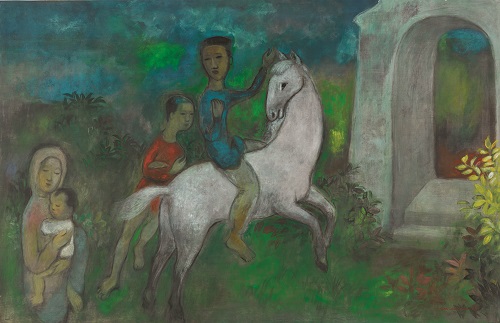 ink and gouache on silk

All artworks here are available for sale, unless otherwise stated. Please contact art@factoryartscentre.com for further information.

(1908 – 2000) Vũ Cao Đàm entered the École des Beaux-Arts d’Indochine as a student of sculpture. Upon graduating in 1931, Vũ Cao Đàm received a scholarship that sent him to France to continue his studies. For a young artist in his formative years, Paris was a particular and fantastic source of learning and inspiration. Here, Vũ Cao Đàm was able to discover and confront paintings by Renoir, Van Gogh, Bonnard, Matisse, Modigliani, and various Impressionist and Post-Impressionist artists. As a sculptor, Vũ Cao Đàm discovered the sculptural creations of Rodin, Despiau, Giacometti, Picasso and the surrealist works of Duchamp. Having suffered for years with asthma, Vũ Cao Đàm, with the support of his family, made the decision to leave Paris in 1949 for southern France. That same year The departure was painted, proving a turning point in Vũ Cao Đàm’s life and career. Vu settled in Beziers and later, in 1952, in Vence. Vũ Cao Đàm’s painting began to reflect the influence of the light of southern France, an element that had been special to the earlier Impressionists and Post-Impressionists. Vũ struck up a friendship with Marc Chagall in 1952 and was influenced by the dreamy, surrealistic landscapes that Chagall was painting. Chagall introduced to Vũ Cao Đàm’s works a multidimensional reality. Set against a recognisable landscape, Vũ’s women, musicians, lovers, clowns, children and horses frolic are transposed from the realities of life into a tableau of fantasy and romance. After encountering Chagall, Vũ Cao Đàm moved from painting nostalgia-laced static images of Vietnamese life and womenfolk to incorporate more narrative content in his works.
X Close